Shopping Cart 0
Cart Subtotal
USD 0
My Cart 0
You have no items in your shopping cart.
All Categories
Categories

Posted on 22 September 2016 by KenResearch Banking Financial Services and Insurance,

Ken Research announced latest publication titled “The Cards and Payments Industry in Russia: Emerging Trends and Opportunities to 2020” which provides detailed analysis of market trends in the Russian cards and payments industry. It provides values and volumes for a number of key performance indicators in the industry, including check payments, payment cards, cash transactions, direct debits and credit transfers during the review period (2011-2015).

Although Russia is a very lucrative destination for investment because of its highly developed industries, yet its payment industry is not that advanced. Indeed, its domestic payment market more closely resembles that of a developing economy than a developed economy such as those of Western Europe and the United States. Russia’s payment market also differs from the other those of the other fast-developing nations referred to collectively as the BRIC (Brazil, Russia, India, and China). Even though Russia has the required infrastructure in place for a prosperous payments system, Russian payment market is extremely incomprehensible since consumers in Russia appear to be extremely suspiciousof modern payment technologies and hence, preferconventional methods of payment which in turn hampers the growth of electronic payment system in the country.

However, in the recent years, there has been a considerable expansion of the domestic payments industry in Russia, which can be associated to strong growth in payment card issuing and spending, banking, and e-commerce activities. Nonetheless, Russia remains one of the smallest payment markets respective to the size of the economy and has tremendous potential waiting to be tapped.

From the above data, the Russian payment market may appear to be stout in the first place, especially with the number of debit cards exceeding the total population of the country. However, under closer scrutiny the wider payment market is mystifying. Despite a large number of issued debit cards, formal bank account penetration is under 50%. Furthermore the overall number of ATMs is minute as compared with the size of the population implying that the card holder cannot exceed the permissible credit limit.

In the year ending 2011, there were approximately 200 million cards in Russiawhich makes it more than 1 card per Russian. Of these 200million cards, Debit cards were the leaders followed by prepaid cards and then the Credit cards. Only 15 million credit cards are in circulation in Russia, which is less than 2% of the total number of credit cards in the U.S. Russia’s prepaid market is even smaller, although it has grown significantly in recent years from a very small base. 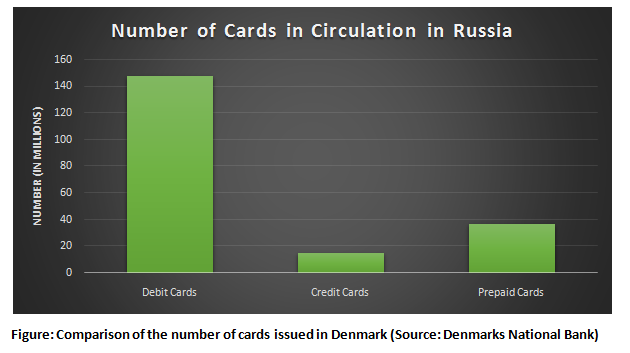 In Russia a major fraction of the transactions are still processed through traditional payment methods. In 2011, the leading payment instrument used in reported transactions remained cash- 31% of total settlement, but this is now declining. Paper-based payment methods are rapidly being replaced by electronic methods in Russia which now represent more than 84% by volume and 92% by value of all domestic payments.The retail credit card market in Russia is developing at a rapid pace and banks in Russia are issuing an increasing number of credit cards. The infrastructure of the payment card industry is fairly developed and has advanced further since 2002. The use of both debit and credit cards for corporate purposes is increasing rapidly as corporates are now aware of their advantages over cash.

An increasing number of foreign banks are entering the Russian market but they face the challenge of competing with other already established foreign banks as well as domestic banks. One of the major hurdles for foreign banks is language because all information relating to settlements has to be in Russian or in Russian with a translation. Any rouble payment between two non-residents, or a resident and a non-resident, also needs a special currency control code that describes the purpose of the transaction in relation to the details of payment provided. Liquidity management in the current settlement system remains the greatest challenge with high-value funds coming in late at night with no way to make use of them.

The development of the RTGS system and the development of formats in line with SWIFT standards is expected eliminate some of these problems and significantly improve the efficiency of the Russian payments system.In addition, banks have their role to play by looking at how they can best meet their clients’ needs by combining the most advanced cash management techniques and structures, such as payment factories and file transfer functionality, with local knowledge and experience of the Russian market.

To know more on coverage, click on the link

Price Fluctuations and Geopolitical Instability, Energy Companies Are Obliged To Reinvent Themselves by Investing In ICT to Increase Efficiency: Ken Research23 February 2018

Huge demand has been observed for steam-sterilised spices and herbs in Europe : Ken Research22 February 2018