What Are the Major Trends Driving the Market?

Emergence of Social Media Presence: The online social media websites and chat windows in the Philippines are the main growth driver of the unorganized sale of pre-owned vehicles in the country. The reason being that the vehicles can be listed on the personal web pages of the individual car seller which is 100% free of charge. 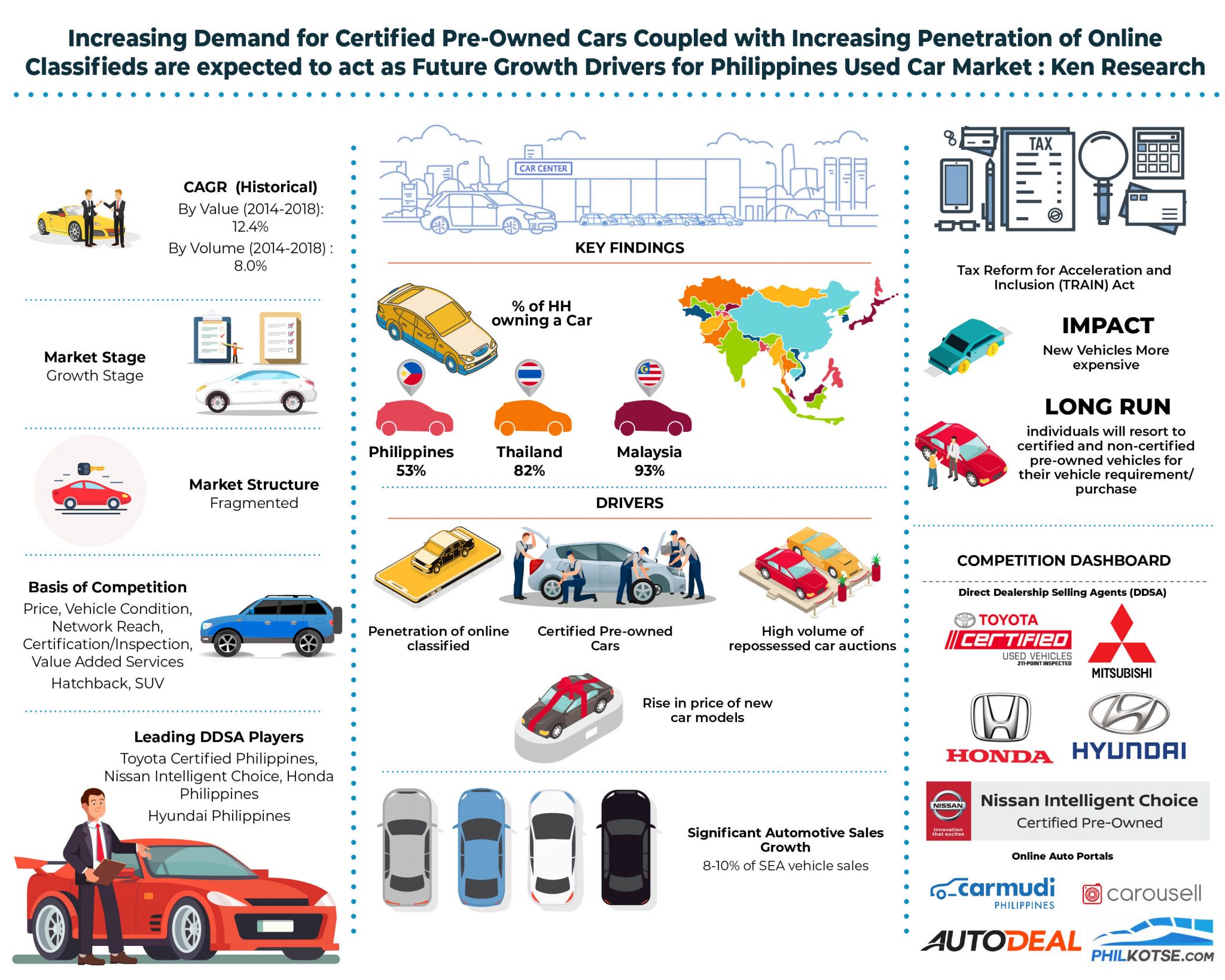 Young Population: As the world is progressing at a very fast pace, the younger generation of the Philippines tend to meet their desires by opting for a used commodity over a new one, which is expensive. As of 2016, 61.1% of the Filipino population is in the age bracket of 15 and 64 years old, only 34.6% of the population is below 15-years old. This states that a huge chunk of the population consists of millennials, who don’t have the financial stability to afford a new vehicle; hence they resort to the pre-owned units in order to meet their requirements for a dream car.

What Are The Major Challenges In The Philippines Used Car Market?

Price Discrepancy: The used car market in the Philippines has price variability due to asymmetric information. The prices in the unorganized market are relatively lower than the organized market due to a lack of value-added services.

High Cost of Finance: It is expensive to finance a pre-owned car than a new car in the Philippines because of the depreciation variable in the picture. The interest rates are high on pre-owned units because the vehicle is already depreciated and is further depreciating leading to a reduction in market price. The financer tries to recapitalize its disbursement by charging a high rate of interest as a default would result in higher losses.

Electric Vehicles Entering Philippines: The EVs have started to change the trend of conventional petrol/ diesel-fueled cars to hybrid/ electric cars. This change in trend led to less pollution emitting vehicle which will impact both used and new car sales. Since the electric vehicle is very new in the market and only a few manufacturers are selling it in the new car segment, the banks have taken the advantage of the opportunity by providing loans for green cars at a very low rate of interest in order to encourage EV purchases in the economy. The emergence of electric vehicles might impact used the car market in the years to come in terms of pricing, acceptability, margins, and others.

The Philippines used car market is expected to increase from ~ units in 2019 to ~ units by 2023. The Philippines used car market by value of the transaction is expected to increase from ~ in 2019 to ~ by 2023, thus showcasing a CAGR of ~%. The market will greatly be affected by the more affluent middle-class segment that might shift their vehicle purchase preference to used cars segment compared to new car sales. As a result, the average ticket size is forecasted to increase due to better availability of quality used cars, an increase in certified used car supply and a decreasing average replacement period of new cars. The volumes of used cars are expected to increase within the organized market because the individual sellers find it easier to sell the unit to multi-brand dealers at a fair market price than through the word of mouth channels. Also, the online auto portals/classifieds act as a platform to connect the individual sellers and used car dealers. Increase in average ticket size of a used car, increase in demand for used cars, the surge in the online listing of used vehicles are some of the reasons to spur the growth in the used car market of the Philippines.

By Type of Market Structure

By Type of Vehicle Manufacturer/Brand

Time Period Captured in the Report: –

Companies Cited in the Report: –

Key Topics Covered in the Report: –

used cars for sale in Philippines,

For More Information on The Research Report, Refer To Below Link: –

Russia Used Car Market Outlook to 2022 – by Type of Car (Sedans, Crossovers and SUVs, Hatchbacks and Others include Micro Vans and MPVs) by Car Age, by Distribution Channels (Dealers and Online)

Increasing Marketing Campaigns and Rising Awareness about High Level of TDS in Water has Influenced Growth in the Water Purifier Industry: Ken Research

Increasing Incidents of Respiratory Ailments in Metro Cities and Rising Levels of PM2.5 Pollutants are Stimulating the Demand for Air Purifiers: Ken Research