Market Overview: Kuwait’s education market is in its growth stage. Changes and overhauls brought in the overall education curriculum through government interventions & subsidies extended has been a major market support parameter. The two major organizations that oversee the operations of this sector in Kuwait are the Ministry of Education and the Ministry of Higher Education.

The education market in Kuwait has registered a revenue growth close to close to 6% during 2012-2017. The Ministry of Education allocated KWD 2 billion in the 2016 annual budget for Kuwait’s K-12 education sector. This is in line with its Integrated Education Reform Program (2011-2019) and the School Education Quality Improvement Project which are geared towards developing curriculum, improving learning outcomes, encouraging efficient teaching and refining the efficiency of education. 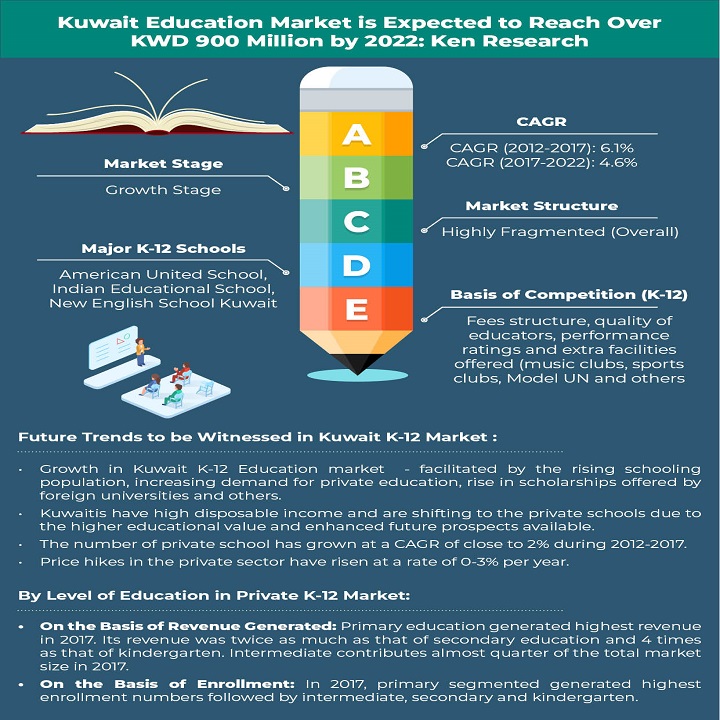 Public K-12 education is extended free of cost in Kuwait with over 800 schools serving over 350 thousand children in 2017. The government expenditure in public education has grown at a CAGR close to 7% during 2012-2016. However, the quality of education in public schools is considered to be poor and there is a growing shift towards private education. The growing demand for better quality education has resulted in more players entering the market with over 500 private schools operating in 2017. American and British schools are the most expensive, charging an average fee of close to KWD 4,000 per year, whereas Indian and Pakistani schools offer more affordable rates at an average fee of close to KWD 450 per year. The market revenue of K-12 education registered a CAGR close to 6% during 2012-2017.

Kuwait’s test prep market is in its growth stage and has a combination of both local and international players operating in the market. The major catchment areas include Salmiya, Kuwait City, Fahaheel and Hawalli and the major players in the market include AMIDEAST, Apachia, British Council and ILM prep. The fees for each course are paid in advance of class commencement. GMAT, GRE and SAT are the most expensive courses with each having an average fee of close to KWD 200 and the most popular course is IELTS with close to 3,000 enrollments in 2017. TOEFL and IELTS, the two English language tests together brought in majority of the revenue registering highest enrollments in the test prep market in 2017. The SAT test prep segment was the second largest followed by GMAT training classes. The smallest segment in the test prep market was the GRE. Kuwait’s test preparation market is expected to expand with the increasing number of players entering the market and creating new test centers.

There were only 2 universities catering to higher education sector in Kuwait in 2002, Kuwait University (KU) and Public Authority of Applied Education and Training (PAAET). Currently, there are over 18 private universities in Kuwait offering a varied number of courses. The popular universities include American College of Middle East (ACM), American University of Kuwait (AUK), American University of Middle East (AUM), Gulf University for Science and Technology (GUST) and Arab Open University (AOU). [There is currently an ongoing expansion of KU that is expected to cater to nearly 40,000 students by 2019. The Kuwaiti government has also granted permits for nine new private universities with foreign affiliations to be established over the coming years.

The government is trying to encourage Kuwaitis to take up vocational courses to compete with expats in the country in serving various job profiles. Public VET is provided by PAAET, Higher Institute for Theatrical Arts and Higher Institute for Music Arts, free of cost. There are some private VET institutes, generally teaching programs from 4pm-10pm regarding skills such as web designing, office management and corporate training. The majority of private VET centers are located in Kuwait City or in the Hawalli Governate.

Internet Penetration in Kuwait was at close to 80% in 2016, resulting in a growing market for e-learning services. There are a few technological concerns such as low internet speeds and bandwidth limitations. Security concerns are also an important barrier to the e-learning implementation. The main E-Learning companies offering content in Kuwait include Track Learning Solutions, British Council, Panacea Infotech, Global Learning and New Horizons Computer Learning Center. The future is promising due to the swift increase in the number of internet users and mobile penetration in the country along with positive feedback from the increasing use of smart classes in K-12 schools and higher use of online portals to read e-books.

There are only two teacher training institutes in Kuwait, namely KU and PAAET which offer training free of cost, even to non-Kuwaitis students. These institutions are publicly owned with no private institutions offering this service in the country. The Ministry of Higher Education (MoHE) is responsible for the accreditation and regulation process of teachers in Kuwait. The steady rise of the student population and increasing competition between students acts as growth drivers in the teacher training market. However, budget cuts and rapid changes in the body of knowledge in all subjects can pose as challenges to the growth of the market.

Private tuition is prohibited by the government of Kuwait, but the market still persists due to the profitability involved. Private tuition is lucrative for teachers as parents and students alike are competitive and indulge in this service to achieve higher grades. The majority of private teachers in Kuwait (70%) are located in Hawalli and Kuwait City.