How Is The Industrial Lubricants Market Positioned In Indonesia? What Are the Major Market Trends Driving the Industry?

The industrial lubricants market in Indonesia is in its growth phase and is meeting demand expectations of every end-user industry (construction and mining, metal production, power generation, general manufacturing, and others) majorly by importing base oil from foreign countries and domestically producing industrial lubricants in the country. A rising number of Domestic & International Players in the market has been complimenting the size of this industry. Owing to these reasons, the market has grown significantly during the review period 2013 to 2018. Other reasons for the significant growth have been the growth of manufacturing sector in the country, mounting FDI projects and investment in various end-user sectors and multiple uses/application of one category of lubricant on the market. This has helped the sales volume of industrial lubricants in Indonesia to grow at a CAGR of ~% during the review period, 2013-2018. Indonesia industrial lubricants market is dominated by the National Oil and Gas Company, Pertamina and Shell and both of them together hold more than ~% of the market share. 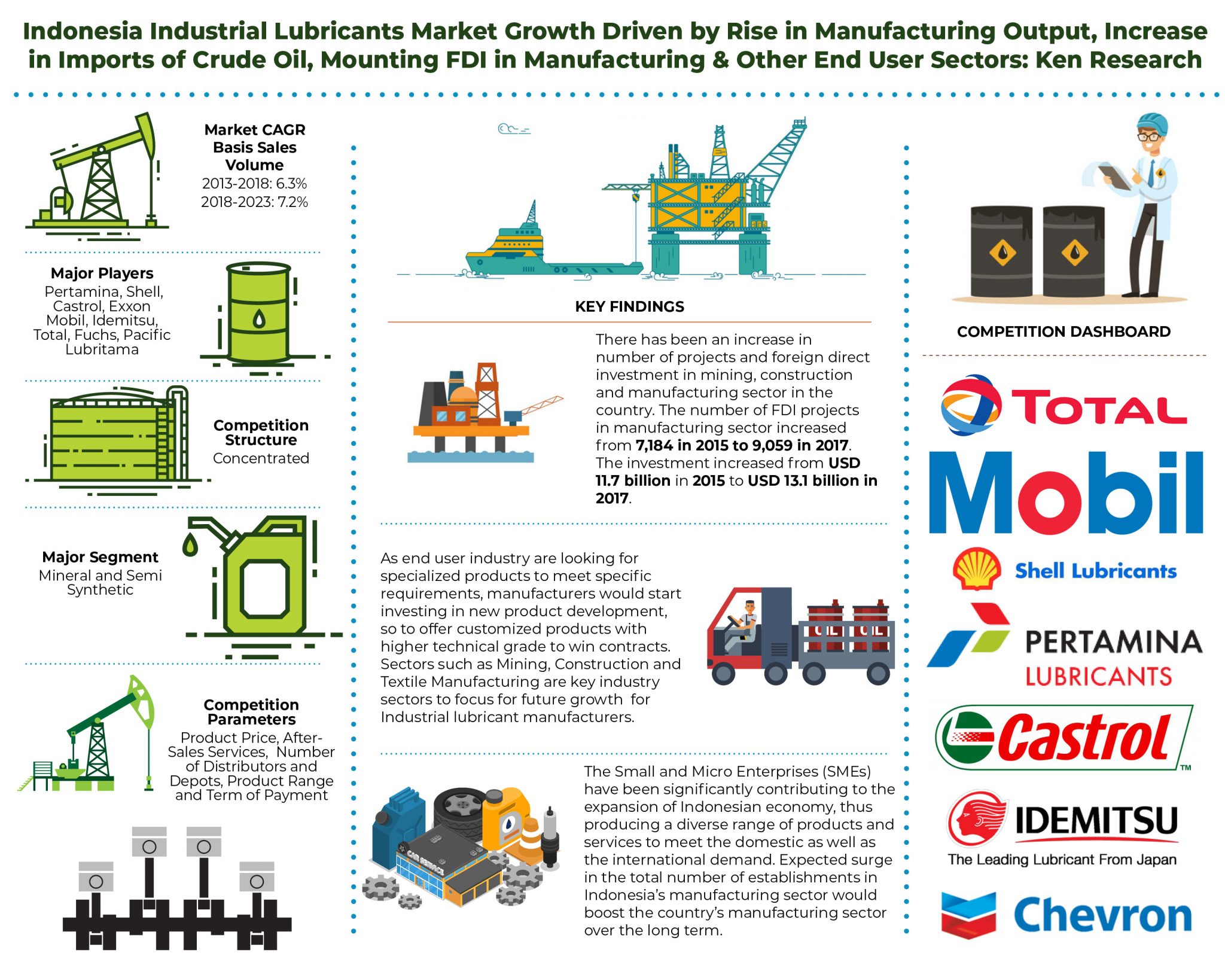 Indonesian lubricants industry has witnessed stiff competition among major players including Pertamina, Shell, Castrol, Total, Exxon Mobil, Idemitsu, Chevron, Balmer, and Lawrie circulating more than 250 brands of lubricants in the country. Many international companies have started to set up their blending plants and manufacturing facilities in order to supply the growing demand for lubricants from the industrial and automotive sector. There are more than ~ lubricant blending facilities in the country as of 31st December 2018. The market has been growing majorly due to usage of hydraulic oil, industrial gear oil and industrial greases in multiple end-user applications and growing manufacturing, construction, power generation, mining and other industries in Indonesia.

What Is The Proportion Of Mineral; Semi-Synthetic & Synthetic Based Lubricants In Indonesia?

What Is The Proportion Of Hydraulic Oil, Industrial Greases, Metal Working Fluid & Other Industrial Lubricants In Indonesia?

By Type of Industrial Lubricants

By Type of Distribution Channels

By Basis of Packaging

For More Information On The Research Report, Refer To Below Link:-