What Is The Competition Scenario In The France Used Car Market?

The competition in France used car market has been observed to be highly fragmented with a huge number of used car dealerships present in the France market. The OEM-certified dealers and multi-brand dealers make up the organized space in the used car market which accounts for around ~ % of the market share in 2018. The online website is more prevalent in the organized sectors for lead generation as compared to the unorganized sectors. The local dealers and the individual seller’s together form the unorganized space in the overall used car market in France, which accounts for approximately ~ % market share in the country, 2018. Competition in tier two and tier three cities is comparatively low in comparison to metropolitan cities of France. There are many local dealers, small garages and many individual sellers which form the unorganized space, constituting approximately ~ % in the used car market in France. 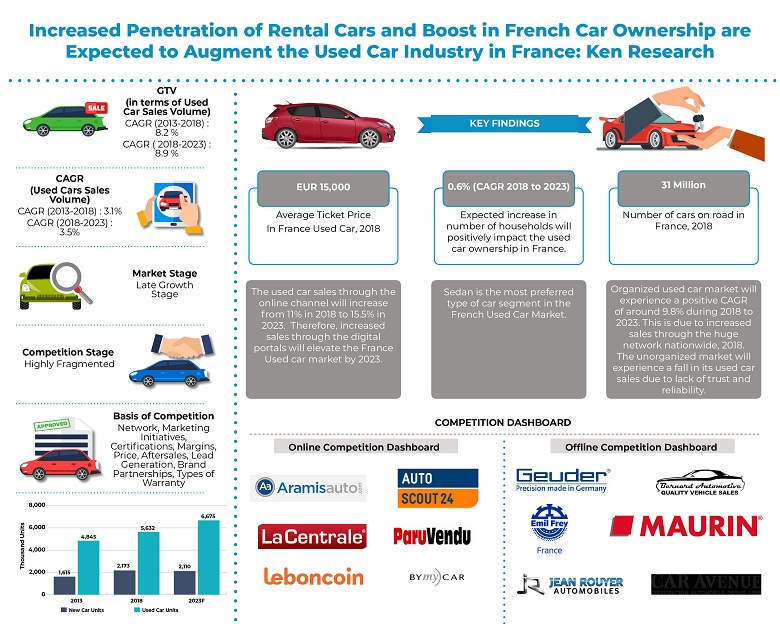 Parameters on the basis of which the used car dealerships compete are a number of network chains, marketing initiatives, certification, margins, price, after-sales services, lead generation, and types of warranty, brand partnerships and a number of dealers.

The online used car portals have a brighter future in the France market as the process of bidding in an auction is hazel free and is convenient for the consumer. Key recent developments in the used car market include forward integration and digitization.

In the future, it is anticipated that France Used Car market in terms of GTV will increase at a single double-digit CAGR during the forecast period 2019–2023. The used car space is projected to increase due to the increased number of dealerships, and more number of lead generations through the online portals. With the increasing population in the country and increased freedom given to the youth of the country, it is expected that the Hatchback or MUV’s will face huge transactions in the coming five years. The used cars sales volume is expected to augment to ~ Million in 2023E from ~ million used car sales volume in 2019. This increase will be possible due to increasing penetration of Hatchback (superminis) in the used car market in France.

The availability of the financing and insurance options makes it convenient and easy for the customers and provides a pleasant experience to the buyers of the used car. The increasing presence of online auto portals will ease transactions, causing higher C2C sales of used cars in the future. Therefore, the used car market is expected to remain strong in the coming future in the country as compared to the new car sales. The growth in the used car market is owing to the fact that there will be new entrants in France and the existing brands will grow their footprint across the whole nation.

Used Cars for Sale in France