Increasing number of BNPL Players and its customer base: In just one year, the Middle East region has witnessed an upsurge in the number of companies offering BNPL solutions. With so much action happening on the BNPL ground, its user base is making equally big strides. A major chunk of Saudi Arabian consumers has used BNPL payment methods such as Tamara in 2021 when compared to previous years, with more customers exploring the BNPL services.

Inception of digital economy: Saudi Arabia has witnessed a huge surge in recent times with respect to digital transactions, serving as one of the major factors leading to rise of digital credit. With e-commerce growing at 2.5 times faster than before the pandemic coupled with the fact that BNPL giants have witnessed immense adoption within retail and the wider community is a major growth driver for BNPL industry.

Credit recovery and overspending:  BNPL service issuers Horne a risk of not being able to recover loan amounts that consumers fail to pay on time. There is a huge risk of overspending anywhere from 10%-40% more on purchases, as these purchases are easier to make. That’s where BNPL might start to resemble credit cards.

Government regulations: BNPL approved in SAMA’s Regulatory Sandbox comes as part of SAMA’s endeavor to support e-commerce, increase the level of financial inclusion, in addition to promoting and diversify the financial services offered within the financial sector, Amid the growing adoption of BNPL products in Saudi Arabia, the Saudi Arabian central bank has made it mandatory for all (BNPL) firms to get a permit. Failing to get a permit from the central bank in Saudi Arabia will lead to legal actions.

Myriad of Merchant On boarding: BNPL players are currently in the process of on boarding a huge chunk of merchants in order to increase their presence in the region. Cashew Payments has recently partnered with health and wellness players as there is a huge chunk of Emirati youth ready to spend their money in this space. Key Target audience is between 24 to 35 and 35 to 45 but essentially the largest chunk is between 24 to 36. This is perhaps the reason why the industry is booming here because a lot of young people live to shop and shop to live so and of course the need for a credit check because essentially the credit card is not very easily granted.

Spike in Global investors: Since TAMARA’s launch in September 2020, there has been a radical change in the mind-set of global investors towards the region as compared to before.  Investors are now more and more open to investing in the region which has led to a spike in global investor interest from Venture Capital (VC) to Private Equity (PE) firms to investment banks.

The report “KSA Buy Now Pay Later Market Outlook to 2027- Driven by digitalization, government support as a part of Saudi vision 2030 increasing Genz & millennials population due to influx of expatriates coupled with shifting preference towards easy interest free extra credit line sources” by Ken Research provides a comprehensive analysis of the potential of Buy Now Pay Later Industry in Saudi Arabia. The report also covers overview and genesis of the industry, market size in terms of revenue generated; market segmentation by types of services, by end users, by revenue division on the basis of Number of Transactions, on the basis of Number of Transactions, by Age Group of Consumers; growth enablers and drivers, challenges and bottlenecks, trends driving adoption of digital innovation; regulatory framework; end user analysis, industry analysis, competitive landscape including competition scenario, market shares of major players. The report concludes with future market projections of each product segmentation and analyst recommendations. 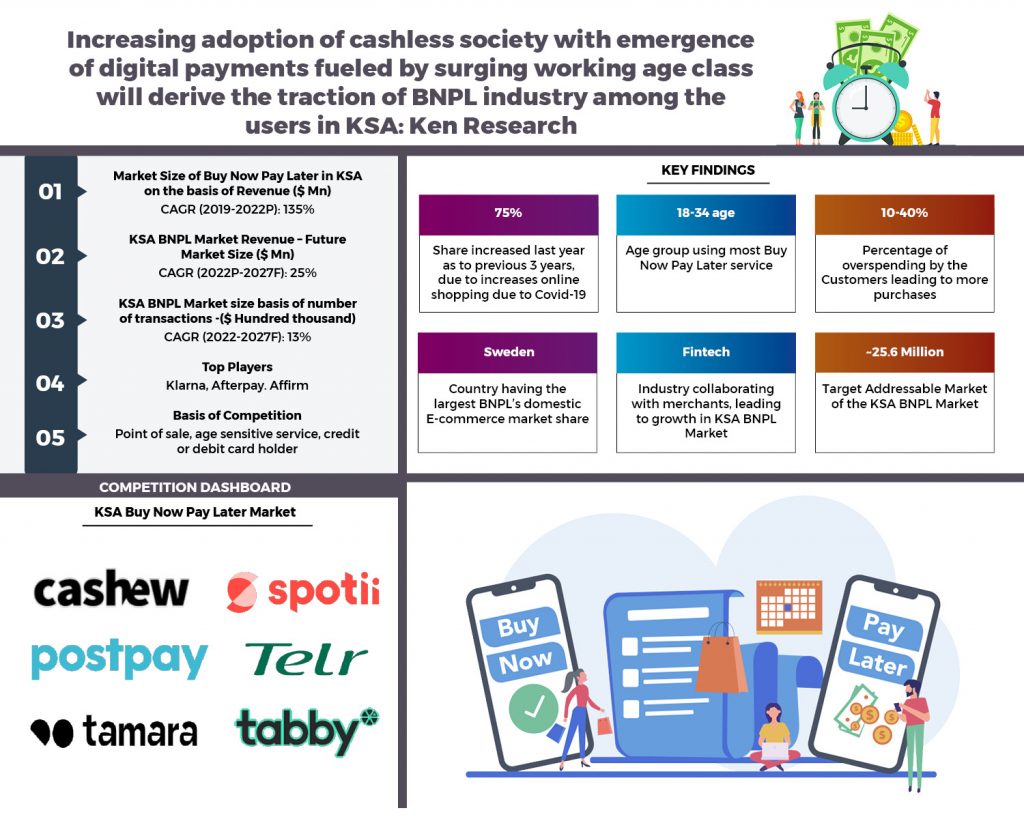 Market Segmentation By mode of payment

Issues and Challenges in KSA BNPL

Role of Government and regulations in KSA BNPL

Market Size of Buy Now Pay Later in KSA on the basis of Revenue,  Number of Transactions and Average Order Value, 2019-2022P

Market Segmentation by mode of payment, by end user, and by age group

Future Market Segmentation by Mode of Payments, by end user and by age group

For more information on the research report, refer to below link:-