No Interest Credit Payments: One of the major reason as to why BNPL is a robust mechanism inside South Africa is due to the fact that customers are allowed to pay the money in three equal instalments with no interest fee. Although, there is a carry forward fee in case the shopper misses the payment deadline, it still is almost negligible making the industry quite lucrative in a region with less per capita income. With a population of ~61 million and USD ~426 Bn GDP as of 2022, South Africa’s economy has been growing at a CAGR of 4.7% during 2016 and 2022. 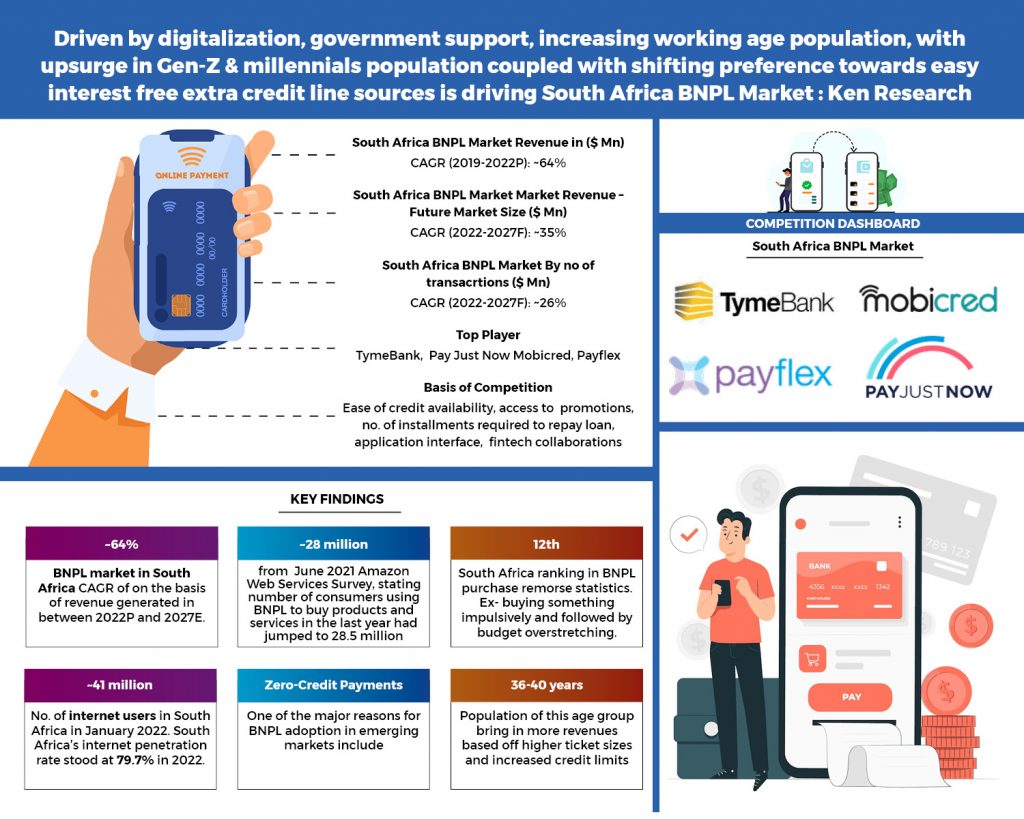 Disruption Penetrated by COVID-19 Pandemic: The South Africa BNPL market boomed during COVID-19 pandemic as huge chunk of the residents lost their jobs during this period and were surviving on their savings and this push forwarded the need for extra credit line which was catered by the BNPL services. Providers such as PayFlex and PayJust Now are making robust efforts to sustain the rising interest in consumer credit financing.

Lack of Awareness in the Consumer Segment: Inception of digital payments is still comparatively new in the African market and thus rural consumer segments find themselves being unaware of the latest trends in the BNPL industry. This when coupled with the digital divide in the urban-rural setting is a massive challenge for merchants and BNPL players in South Africa due to lack of means of financial awareness in the country.

Analysts at Ken Research in their latest publication “South Africa Buy Now Pay Later Market Outlook to 2027 – Driven by digitalization, government support, increasing working age population, with upsurge in Gen-Z & millennials population coupled with shifting preference towards easy interest free extra credit line sources” by Ken Research observed that increasing adoption of cashless society with emergence of digital payments fueled by surging working age class will drive the traction of BNPL industry among the users in South Africa. Increasing demand for extra credit line with less stringent KYC procedures without relying on CIBIL scores will be traction for consumers for utilization of BNPL services. Buy Now Pay Later industry in South Africa is expanding at a CAGR of 35.1% in between 2022P and 2027E.

Key Topics Covered in the Report: